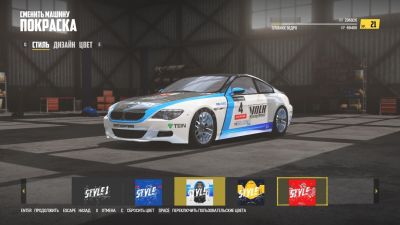 AI rivals have appeared, while there are six races with cars to choose from. Four variants with the same liveries (unique for each race) and two races with paired liveries (half with one appearance, the second with another).

The car behaves in a new way

Most importantly, this BMW M6 2010 car mod in the Wreckfest game will behave quite interestingly; With a little trick, you can drive sideways on corners. That is, almost a drift imprisoned. While AI cars (AI standard) don't do a great job of it, it gets too carried away sometimes. But it's atmospheric. And especially if you play on a racing game steering wheel.

It is recommended to install the Laguna Seca Wreckfest Racetrack Mod from The Very TrackPack 2 and choose your own 2010 BMW M6 race. You will really see the spectacle there!

A lot of things have been corrected and finalized, exactly as much as it allows in the absence of the source code.