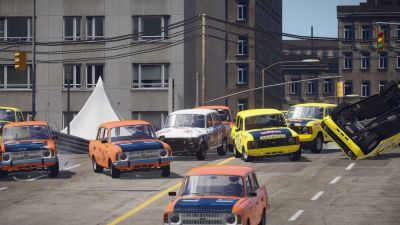 After the experience with the first car mod for Wreckfest, the desire came to do a new project, which is already completed at the moment. And this second mod project is a Russian car IZH Moskvich 412 IE-028 for Wreckfest racing game. He also added a lot of experience in modding, especially in terms of quality and fps optimization.

What does Moskvich 412 IE IZH-028 have in Wreckfest garage

There are two engines in performance and four or five other parts that give power to the engine. The engines themselves also differ in power and their original sound, their characteristics are different enough to be felt in races. This is especially evident from the behavior of AI Moskvich, two different engines with parts of the same power will show themselves differently when competing in the Wreckfest race.

There is armor for Moskvich, but it was calculated more for beauty, in addition to other unique details from the appearance.

Parts list:
- 6 safety cages in the form of a roof rack;
- Mudguards are placed in place of the side protection;
- Six options for wheels with rubber and a cap;
- Many mirrors and options for their location;
- One wide body with wide wheels;
- Five hoods and three radiator grilles;
- Six exhaust pipes, the sound does not change;
- 11 front and four rear bumpers;
- Painting and 25 stylish liveries;
- A hitch is also available.

On Moskvich, choose the gear ratio of the gearbox based on engine power in order to have fast acceleration or slow to high speed. You can experiment with the gear ratio individually, they are all different.

It is recommended to choose a locked diff with a high suspension that is not the stiffest. This will make it easier to take turns, quickly and with a whistle - a practical drift. There are also other tuning options, you just need to experiment with the settings and conduct tests in races to suit your convenience.

You can get into such car settings that it will turn out to be tough in corners and move like oak on bumps. Heavy handling in a stiff suspension, plus it can tip over unexpectedly in extreme conditions.

In the course of the development of the Moskvich 412 mod, it was time to create AI, configure the tuning of the units and determine the appearance. All the details from the garage and livery got into the appearance of the car, but they are distributed according to their classes. Considering the characteristics of the engine and the ratios of the gearbox, some of the AIs are blunt, and some are quite aggressive.

The car mod for Wreckfest was made for two free years, from the finished 3D model Moskvich IZH-028 with textures. What happened at the end was a naive notion of building a car for a racing game, which had to take into account many nuances. It turned out to be an extreme optimization of the model, but the fps is exactly half lower than from the default ones... The mod is designed for high quality Wreckfest graphics, because at low quality the Moskvich car model looks extremely distorted, and at ultra fps settings it flexes noticeably. It all depends on the configuration of your computer.